This is a Holy time of year for many if not most cultures. We are in the season of Lent. The holy days of Purim, Passover, Palm Sunday and Easter are on their way. When our seasons change around the equinoxes, humanity historically throws a number of Parties.

There is a wonderfully colorful and magically fun festival celebrated by the Hindus, Sikhs, Buddhists, Jains and almost all Nepalese this time of year. This festival is called Holi – the festival of colors. Streets across the Hindu cultures will became playgrounds as revelers throw colored powder and water at each other to celebrate Holi, also known as the Hindu festival of color.

Those enjoying the celebration of Holi paint each other in the name of Love, Happiness and Joy. Holi is ancient and has been celebrated for millennium. 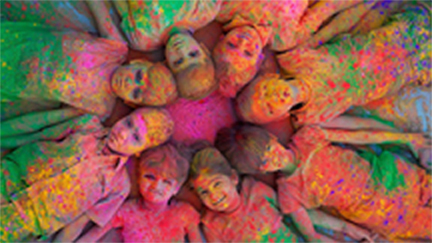 Because of the levels of meaning and sacredness during this Holy time of year for so many, I thought we would explore the origins and Godsign aspects of the words Holi – Holy – and – Wholly.

Last night was the full moon. The festival of Holi is celebrated the day after the full moon in early March every year. Originally a festival to celebrate good harvests in the coming seasons and fertility of the land, Holi is now a symbolic celebration from Hindu Mythology. The story begins with an arrogant king who resents his son Prahlada for deeply and sincerely worshiping Lord Vishnu. The king attempts to kill his son but fails each time. Finally, the king’s sister Holika who is said to be immune to burning, sits with the boy in a huge fire. However, because of his deep and sincere reverence for Lord Vishnu the boy – prince Prahlada – emerges unscathed, while his aunt burns to death. The festival of Holi commemorates this event from mythology, and huge bonfires are burnt on the eve of Holi.

The Holi Festival is exuberant and is also associated with the immortal love of Krishna and Radha and is spread over 16 days in certain areas. People have wild fun with colored powder and water.  Holi is marked by vibrant processions which are accompanied by folk songs, dances and a general sense of abandoned vitality

It is believed that Holi is a festival of radiance (Teja) in the universe and that during this festival, different waves of radiance traverse the universe, thereby creating various colors that nourish and complement the function of respective elements in the atmosphere.

So, to have a Holi Day is to have a divinely colorful and inspiringly fun day.

Take away a small space between those two words and we can all agree that to have a Holiday is to have a fun day.

The 11th century brings the origin of the word “holy” into Western religious traditions. Old High German hulis and Old English holegn mean Holly as in Holly Tree. Holly was considered a sacred plant to both Romans and pre-Christian Celts.

The distinction of the word holy becoming sacred and not having to do with just the plant Holly appeared around the 13th Century. The Old English word hālig meant health, happiness and wholeness. As “wholeness”, holiness refers to a state of religious completeness or perfection.

So holly leads to holy which in turn leads to wholly. While another part of our world celebrates Holi. We all dance the same Holy circle Dance of Spirit, we just use different words to describe the same Dance….

We often hear today about ‘holistic’ healing and the practice of living in a holistic way.

A holistic approach to healing by alternative medicine practitioners emphasizes the emotional, mental, spiritual, and physical elements of the patient, and claim to treat the whole person in this context. Some examples of holistic approaches include ayurveda, chiropractic, homeopathy, traditional Chinese medicine, naturopathy, Unani and reflexology. These healing modalities work to heal the ‘whole’ individual. To me that makes them holy practices and practitioners

The Sacred, our divine Creator spins a phonetic sound around us in our life – such as holy and wholly – and then Uses it as Godsign to get us to look at various aspects of being wholly holy. As the ancients knew from their words and practices to be whole as a person is a holy thing!

What are we doing to this holy ground,
this land that God gave to us all
‘Cause everywhere I hear that crashing sound
that trees make when they fall
Why can’t we understand when it turns to sand
There’s no way you can bring it back again
Why don’t we change the plan,
and try to save this land
And make a promise not to hurt again
this holy ground

What are we doing to this sacred heart,
this heart that’s beating for us all
‘Cause everywhere I see it torn apart
as tears like rain will fall
Why don’t we take the time, take a look inside
Try to understand what’s going wrong
Stop trying to change the tide, overcome our pride
Take off our shoes, this place we’re standing on
is holy ground

What are we doing to the children’s lives,
the ones we shouldn’t hurt at all
‘Cause in the night I hear their lonely cries,
so frail and small
How can we just stand by
and watch them fade and die
Before they even reach the age of ten
Why don’t we heal the pain,
take away this shame
And make a vow to give them back
again this holy ground

They are all our WHOLLY HOLY CHILDREN!