Hello All
Happy Friday
HAPPY FATHER’S DAY to all the dad’s out there!

And then a hero comes along
With the strength to carry on
And you cast your fears aside
And you know you can survive . . .

I am very honored to have been selected to be one of 6 speakers for this wonderful event!!! Please join us, everyone will have a wonderfully synchronistic and magical time . . . more to come next week! 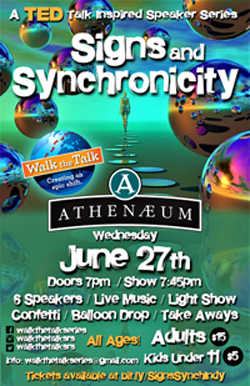 The information below is from the Walk The Talk website.

With this talk, we move outside The Vogue and it will be presented at the Basile Theatre in the historic Athenaeum, downtown Indianapolis.  Our events always include live music, 6 fabulous storytellers, confetti, interactiveness, a Motivational Balloon drop (inside each balloon is a motivational phrase on topic), a cool light show, and lots of takeaways on topic!

Thanks for helping us create an epic shift, one person at a time.
And that person is you!

There are many examples in life of heroes. Webster’s Dictionary defines a hero as: a person who is admired or idealized for courage, outstanding achievements, or noble qualities. There are many ways of defining a hero. Many times there are people who come along and help the rest of us stand a little taller, hope a little more, shine a little brighter. Spirit suggested the topic of united heroes before this Father’s Day as our Godsign message was really needed and I couldn’t agree more.

I looked in some ‘How To’ manuals for heroes to see what beliefs most heroes unite around. Heroes will be the first to tell you they aren’t perfect but they tell the truth and know great weakness is found in lies. Heroes unite people, groups, countries, they don’t work to divide them. Heroes stand by their friends and allies. Heroes help make families stronger and do their best to keep children with their moms and dads. Heroes help those who don’t have the basics in life to strive for better. Heroes do what they can to get those who fear for their lives to a safer place. Our Statue of Liberty has long been a symbol of the heroic nature of America and Americans. Give me your tired, your poor, your huddles masses yearning to be free . . .  Are those words and sentiments no longer considered heroic?

Many are asking these days where are the heroes? Where did all the good, caring, compassionate and courageous heroes go? But it doesn’t take long, if you look, to see that we are always surrounded by heroes in life. Here are just a few of the innumerable heroes you can find in our world.

There is a man most in the world respect, who began serving America in the Navy when he was 22. He has continued serving the United States for over 60 years. He has not been able to raise his arms to brush his own hair for over 50 years because of the torture he received as a POW. He spent over 5 years as a prisoner of war and refused to be released early from captivity because his fellow POWs were not going to be released. For all of his adult life he has worked to unite the United States around beliefs, laws and standards that represent the best, strongest and most honorable aspects of the United States and being an American. He is willing to stand up to bullies, lies and the darker elements around us to make our country stronger, more courageous and to be a Light unto the world.

Most of you out there know who I am talking about. Regardless of party or politics, Senator John McCain walks the talk and in most ways has shown us all what being a ‘Hero’ looks like in life. He has been and always will be for me one of my favorite and most beloved of American heroes.

There is a group of young people who faced profound tragedy, terror and heart breaking sorrow. But as a group, they did what heroes do – they faced it and talked with anyone and everyone about ways to make it better and safer for us all. They stood up against the terror and sorrow and didn’t let themselves, or those who died, get swept under the rug – even when powerful people and forces tried to do just that.

The students of Marjory Stoneman Douglas High School in Parkland, Florida, the Eagles, are incredible role models for their generation and I believe for all of the world.

Unreasonably powerful companies and organizations tried to stop them with threats, attempted to shut them up with lies, worked to bring them down with fear tactics and hatred.

What did they do? They stood Up and said no more. They organized millions of Americans to unite around the cause of gun safety. I deeply believe it should have been done after Sandy Hook. If those children had been high school seniors rather than first graders their screams, sorrows and voices would have been heard. The adults didn’t stand up after Sandy Hook or much after Parkland – but the young students are doing just that. They are doing what united heroes do and are showing us all what that looks like in these ‘ungreat’ times to be a hero in America.

The Eagles in Parkland, Florida walk the talk!

You can find heroes in every community, village, town, city, country. We have many here in Indianapolis. The true heroes are not usually the ones who are famous or have their pictures all over the news. True heroes are like the guy down the street who cuts the grass every week for the widow who lives a few doors down because she just can’t do it. He doesn’t ask for money or thanks, he just does the right thing and cuts her grass.

Heroes are the teachers throughout our schools who spend their own money to get their students pencils and paper and supplies because the government has cut funding for them – yet again.

Heroes are the police, fire fighters, EMTs, doctors, nurses and first responders who regularly have to deal with the worst in life while bringing forward the best of themselves. They daily spend their lives helping children, the elderly, families every where and many times for too low a pay.

They do their best to walk the talk!

I would like to mention three heroes who are helping to lift the spirits and hearts of many in our community with their hard work, music, words, lifting our Spirits and through their actions bringing more love and unity into Indianapolis and beyond.

The next two men are responsible for starting, organizing and bringing to our city, and our world, the Walk The Talk events, among many other great works.

Steve Ross has been a huge part of the music and entertainment scene here in Indy for over 35 years. He has helped to bring music, joy, laughter and good times to thousands of people. Through the owning and operating of 5 successful nightclubs, The Vogue in Broad Ripple but one, Steve has been a visionary and brought Light through music into our world. His favorite thing to do is to work with people to create and manifest their visions and ideas, while having great fun doing it.

He knows everyone has great creative ideas within them, as long as they become empowered to try. During the awesome creating process which he helps many to explore, many cool things happen: minds are opened, visions are projected, ideas are shared, art is designed, sweat happens, and in the end awesome events are created! This is what he LOVES to do!

Richard Brendan brings love to life through his teaching, counseling, speaking and producing. He is the host and executive producer of the Richard Brendan…Bringing Love to Life weekly radio program. Often referred to as a “Social Change Artist” Brendan is also known for his visionary creativity, fiery passion and heartfelt communication skills.

Besides that busy life, Richard is a minister working with hospice patients and their families. He has visited Haiti numerous times, inspiring and providing for the less fortunate through his speaking and humanitarian aid, helping in relief efforts there for children and their families. At the core of each of Brendan’s projects lies the primary intention to inspire and enlighten people of all ages to become more aware of how to bring love and compassion into their daily lives and communities.

Steve and Richard do their best to Walk The Talk!

Chris Speck has owned and operated Inner Path for over 10 years. He has worked not only in these last 10 years, but many years before that, owning and organizing a place where anyone can find a bit of serenity, a warm hug, caring, loving people and fun stuff to do, see, have and explore.

Because of Chris’ hard work, along with many others, thousands have come through the doors at Inner Path, looking for answers and many times finding them, often being helped to see those answers within themselves. People come in sorrow or fear caused by loss or what seems to be an uncaring world, only to find a smile, a friend, someone who not only cares – but Loves and listens. Inner Path, Chris, and all of us there, work to bring more Light and sacred Love into our world. That would not have happened without Chris.

Chris Speck does his best to walk the talk!

Big THANKS to all the united heroes in our world, like my dad Jack, my sons’ dad Martin, all the great dads amongst my family and friends and to all those hero dads out there who walk the talk!

It’s More Then We Can Say

BIG THANKS to all the Dads, who live this story, helping their kids know what great dads do every day because of how much they love their children.

© Annie and many many kids

And then a hero comes along
With the strength to carry on
And you cast your fears aside
And you know you can survive
So when you feel like hope is gone
Look inside you and be strong
And you’ll finally see the truth
That a hero lies in you, oh, oh

Lord knows
Dreams are hard to follow
But don’t let anyone
Tear them away, hey yeah
Hold on
There will be tomorrow
In time you’ll find the way

Please keep all those effected by devastating ‘out-of-nowhere’ tragedies in your prayers, sending them healing Waves of God’s Light, Strength and Love. There are still so many in pain, just trying to get through. Thank you for your help and prayers!